How to make any Tutorials 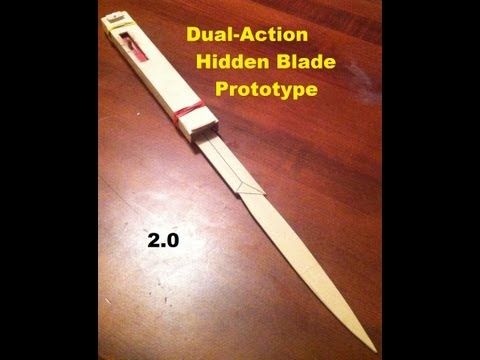 To build a hidden blade, you’ll need to mount the blade on an inside slide. You can do this with rapid rivets, three or four of them will hold the blade mechanism firmly in place. Now, you’ll attach a ring to the free end of the string to activate the release. Now, you’re ready to assemble the entire hidden blade system. Here’s how:

The Hidden Blade Mechanism is what deploys the blade at the flick of a wrist. It’s a simple mechanism with two components: a flat spring and a coil spring. The flat spring pulls the blade lock out of the hole and the coil spring pulls it back in. The springs must be tightened to keep the blade from deploying in a dangerous situation, and the springs must be connected to prevent it from moving.

After you have built the hidden blade mechanism, you’ll need to add straps and fasteners. These straps attach to the Velcro on the bracer and the Hidden Blade. Once you have finished the blade assembly, you can move on to constructing the Hidden Blade mechanism. The blade assembly is the last step in this build. It is very simple to make, but there are a few things to keep in mind.

Mount a blade to a modified inside slide

Attach a string to a blade

You’ve probably heard about Blade and its ability to process text. Blade supports strings, which are wrapped in either single or double quotes. You can wrap them in either one or the other, though they are pretty much the same. You can also use backslashes to escape them from the file and use multiple lines for each string. To learn how to attach a string to a blade tutorial, continue reading! Then, you can start implementing your first Blade scripts!

To attach a string to a blade, you can start by laying out your foam blade on the floor and determining its length. You can piece it together, as the next couple of layers of diffusion will hide the seam. Next, you’ll need to cut the string to the appropriate width. The string must wrap around the foam and not slip under the blade itself. You can’t leave this gap unfilled!

Tie a ring to the free end of the string

A Hidden Blade is a weapon with a simple mechanism to deploy and retract. A hidden blade is deployed by flicking your wrist. The flat spring pulls the blade lock out of a hole in the bracer, then retracts when the user releases the weapon. When using this weapon, it’s best to keep your hands on the bracer and not on the blade!

Once you’ve drilled the holes, tie the free end of the string to the ring. Make sure the string is not too tight or too loose. When the ring is on the middle finger, it should fit snugly, releasing the blade and pulling it out of the hand. This step is crucial in creating a hidden blade. You can also use a small hammer to pound down the tabs on the outside slide to release them.

There are two ways to activate the blade release when making a hidden-blade tutorial. First, you need to make a small hole in the flat spring near its ground end. Then, string a knot through the hole to act as a stopper. Once the spring is secured, attach the blade mechanism to the bracer. Finally, attach the ring that activates the blade release.

The second method is to create a concealed blade that is situated along your forearm. Once you have positioned it, you can trigger it by flicking a finger. To make a hidden blade, you need a 14-inch standard drawer slide. Insert this slide into the middle of the drawer, and it will act as the case for the blade. Next, install two flathead Phillips screws that are two inches long with nuts on either end. Lastly, add a key ring to fit over your finger.